Valagro, a leader in the production and marketing of biostimulants and specialty nutrients, announces that its subsidiary Maxicrop (UK) Ltd, has changed name to Valagro UK Ltd.
The seaweed extract fertiliser and biostimulant company became part of the Italian global plant nutrition group Valagro in 2002, but has continued to trade as Maxicrop UK until now.
Following the signing of the strategic partnership agreement with SBM Company last September, for the distribution and sale of Maxicrop garden products, Valagro UK is now firmly focussed on the professional grower markets. This is in line with Valagro’s global strategy to become a leading player in Ag Nutrition and Biologicals by integrating and delivering advanced products and value-added tech-based services to farmers globally. The name change to Valagro UK therefore further aligns the company with the Valagro corporate approach.
Valagro UK Country Manager Shane Deaville: “Valagro UK will continue to market the Maxicrop Professional range of seaweed extract-based biostimulants. In addition, the company will supply other Valagro biostimulant and plant nutrition products, such as Megafol, Radifarm and Erger. Sales of Maxicrop Professional products have seen significant growth in recent years, and with the very late Spring this year, there are signs that growers are turning to these products to give backward crops a growth boost and reduce plant stress”.

Valagro (the Italian international plant nutrition group and owner of Maxicrop UK) and SBM Life Science are delighted to inform you that they have signed a strategic partnership agreement. Thanks to this agreement SBM will take over the marketing and sales activities of Valagro’s gardening products in the European and the US markets.

From 1st October, SBM will be responsible for the distribution and sale of product ranges developed by Valagro and Maxicrop in the UK gardening market, and will undertake deliveries from November.

This partnership will also offer SBM favoured access to Valagro innovations in plant nutrition to provide increasingly innovative solutions for future challenges. The partnership will also enable the Valagro Group to focus on its core activity as a leading player in Agricultural Crop Nutrition and Biologicals for farmers and commercial
growers globally.

The Maxicrop brand now enjoys an enviable position in the UK garden market, especially for organic gardening. Maxicrop and SBM sincerely hope that you will continue to support the development of the brand under the new arrangement. 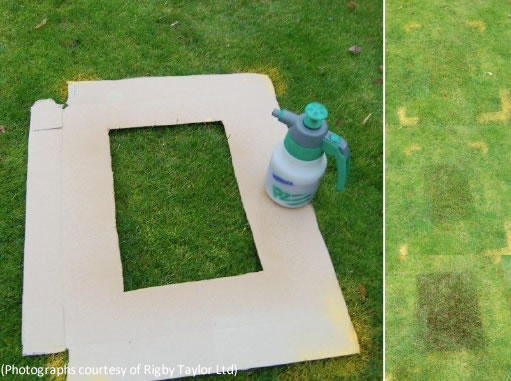 The product was sprayed on to turf at the new rate equivalent to 1.5 litres per 100 sq.m.

Photographs were taken after 1 minute; 5 minutes and next day – see pictures.

The degree of blackening of the moss after 24 hours is testament to the highly effective nature of the product in killing moss.

But even after only 5 minutes, the product can already be seen starting to blacken the moss – another key indicator of the product efficacy.

Maxicrop Moss Killer & Lawn Tonic has recently gone through pesticide re-registration and is now authorised under the Plant Protection Products Regulation (EC) No 1107/2009 for use as a moss killer on amateur lawns.

New lower application rate
The product is now authorised for use at half the previous rate – 1.5 litres per 100 sq.m. of lawn (compared with 3.1 litres per 100 sq.m. previously). This new lower rate was confirmed as a result of extensive trial work, carried out as part of the re-registration process.

Previously, all iron sulphate-based moss killers were licenced to deliver a standard dose of iron sulphate. However, under the new regulation, each individual product had to be tested at different rates to determine the minimum rate to kill moss.

According to Shane Deaville, Maxicrop UK Country Manager, the lower rate approval for Maxicrop Moss Killer & Lawn Tonic was possible because the product is applied as a liquid. “Unlike granular or powder moss treatments, that have to dissolve and percolate through the grass to come into contact with moss, Maxicrop Moss Killer & Lawn Tonic liquid is mixed with water and sprayed or watered on – thereby making good contact with moss for a quick, efficient kill”, said Mr Deaville.

“The product hasn’t changed – just the application rate – which will significantly reduce application cost”, he added.

After the very wet winter we have had, moss is now a real problem in many lawns.
Maxicrop Moss Killer & Lawn Tonic contains seaweed extract, which stimulates grass regrowth, green colour, tillering and rooting – for better quality turf.

New trials have confirmed the benefits of using seaweed extract based bio-stimulants to improve rooting and reduce stress in oilseed rape.

The most effective programme produced a 0.8t/ha (27%) yield response and a 0.2t/ha (16%) increase in total oil yield from autumn and spring use of Maxicrop Triple.

Based on oilseed rape at current farm values (£390/t) this yield improvement alone would be worth an extra £285/ha after the cost of treatment.

According to Maxicrop UK’s Mike Garner, while a range of factors are probably at play, the response is probably due to better rooting in difficult conditions and then the resultant improvement in spring and summer growth.

“This effect is often exacerbated in difficult autumns like 2011 and without these fibrous roots the plant’s ability to take up nutrients and moisture later on in the season is restricted.”

The independent trials – conducted by NDSM Ltd in 2011-12 – for the first time bolted on an autumn application at the 3-5 leaf stage of the crop to a tried and tested spring application commonly timed at stem extension.

While analyses of root or shoot biomass were not taken, measurements of boron in plant tissues confirmed better nutrient uptake potential of the Maxicrop Triple treated plants.

Levels in plant tissue in the spring ranged from 8-20% higher. “Treated crops were better able to scavenge more boron from the soil and effectively use it to fuel growth,” says Mr Garner.

“We have seen the benefits of a spring application of Maxicrop Triple in the past but this trial shows that the product can help improve early emergence and then maintain growth over a contrasting season.

“Fundamental research has shown that specific carbohydrates in our seaweed extracts serve as a source of food for beneficial and benign soil bacteria, resulting in a large increase in microbe numbers,” he points out.

“In addition, soil and foliar application of Maxicrop Triple has been shown in University Research to result in greater maintenance of chlorophyll, leading to greener plants.

“This is, in part, due to a complex family of different betaines in the seaweed extract, which help reduce natural damage to the photosynthetic process.

“The practical benefits of these principle effects within the plant are to minimise some of the stresses imposed on the crop during key periods of growth and hence to keep the crop on course for high yields.

“Our advice to growers this year is to utilise Maxicrop Triple at 2-3l/ha both in the autumn and then in the spring, tank mixed with standard fungicides to counteract the varied stresses that curtail crop potential at these stages.

“While crops now have sufficient moisture to encourage early growth, many, particularly in the north, are drilled late and these will need all the help they can get to make up for the delay.”

Maxicrop Natural Fertiliser is a 5:2:5 NPK liquid with added seaweed and plant extracts. The product is suitable for use either as a foliar feed or it can be applied to the roots or soil, as a drench. It is designed to supplement plant nutrition during the growing season  and can be safely used on a wide range of crops and plant types. Maxicrop Natural  Fertiliser is approved by the Soil Association for use in organic production systems.  In addition to providing a balanced level of nutrition, Maxicrop Natural Fertiliser also has the added benefit of containing seaweed extract, which has various beneficial effects, including:

The net effect of using Maxicrop Natural Fertiliser is to produce a strong, healthy plant which can meet the growth stresses encountered during  the growing season, resulting in top yields and quality for the grower. 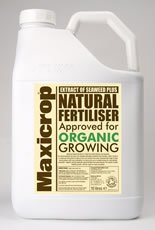 Posted in Latest News | Tagged fertiliser, growers, maxicrop, natural, organic, seaweed | Leave a comment
This website uses cookies to improve your experience. We'll assume you're ok with this, but you can opt-out if you wish.Accept Read More